This industry is composed of six segments: publishing (newspapers, magazines, books and software); motion picture and sound recording (movies, videos, television programs, commercials, music recording); radio and television broadcasting (radio and TV networks, including pay and specialty channels, but excluding Internet broadcasting); telecommunications (providing telephone, television and Internet services through wireline, co-axial cable, optical fiber, wireless and satellite technologies); data processing, hosting and related services (data entry, data storage, data analysis, web hosting, audio and video streaming); and other information services (news syndicates, libraries and archives, Internet broadcasting of textual and audio/video content, web search portals). Production and employment is distributed quite unevenly across the six segments. Telecommunications services are the largest segment, accounting for 57% of production and 35% of employment in 2018, making this segment the most capital intensive, but also the most highly concentrated with five companies accounting for more than 80% of revenues. In comparison, motion picture and sound recording accounted for only 8% of production but 24% of employment, making this segment the most labour intensive. Publishing services accounted for 18% of production and 20% of employment, compared to 17% and 21% respectively for the remaining three segments. Overall, the industry employed 342,400 workers in 2018, largely concentrated in Ontario (42%), Quebec (23%) and British Columbia (17%), with men accounting for the majority of the workforce (59%). Given the wide variety of activities, key occupations (4-digit NOC) include a mix of:

Digital technologies have transformed the ways information and cultural products are produced, distributed and consumed, and telecommunications services providers are playing an increasing role in making these products accessible to the public. Basically, the industry is heavily reliant on consumer spending and businesses expenditures in Canada, making it sensitive to fluctuations in domestic economic conditions. After experiencing a slight decline during the recession of 2008-2009, output increased almost continuously from 2010 to 2018, but the pace of growth was quite modest, primarily reflecting the disruptions caused by the digital revolution. Growth in telecommunications services was constrained by the decreasing use of home phone lines, the growing maturity of the wireless segment, and changing TV viewing habits toward online content (such as Netflix), which has weighed on traditional TV subscriptions (such as cable or satellite TV). Output in radio and television broadcasting was significantly lowered by the consumers’ shift toward audio and video streaming (such as Spotify and YouTube) and the resulting decline in advertising expenditures in traditional media in favour of digital platforms. The transition toward digital media has also reduced demand for printed materials (newspapers, magazines, books), lowering advertising revenues and economic activity in the traditional publishing segment as well. Those factors were compensated by solid growth in the other three segments of the industry, namely motion picture and sound recording, data processing and hosting, and other information services (these segments include audio and video streaming and the publishing or broadcasting of content on the Internet).

The resulting pace of growth in the industry’s real GDP averaged a modest 1.0% annually over the period 2009-2018, about half the pace of the whole service sector average. While the advent of digital technologies clearly restrained output growth in the industry, the impact was even more pronounced for employment, which fell at an average rate of 1.3% per year over the past decade. During that period, the traditional publishing and radio-television broadcasting segments lost 48,000 jobs due to the declining trend in their respective output. This excludes, however, software publishers where employment rose by 18,400. The telecommunications segment lost 38,700 jobs, partly reflecting the fact that many of the customer services operations (including sales and technical support) were outsourced in external call centers, often located in less-developed countries, such as India and China. Telecommunications firms have also invested heavily in their information systems, which resulted in robust productivity gains. In turn, the growing number of tasks being automated has reduced demand for less skilled workers. On the other hand, solid output growth in motion picture and sound recording since 2012 has led to the creation of about 26,000 jobs in the past six years. These sizable gains were largely supported by new technologies and digital platforms which have significantly reduced the costs associated with the production and distribution of audio and video content. This segment has also benefited from the lower value of the Canadian dollar, which has increased Canada’s competitiveness as a location for the shooting of foreign movies and TV series, particularly American productions.

Over the projection period, output growth in the industry is expected to accelerate significantly relative to the period 2009-2018, primarily driven by robust demand for online content and the growing requirements in terms of data transmission and storage. More specifically, the shift in the distribution and consumption of information and cultural products toward digital media will continue to stimulate the demand for online publishing and broadcasting as well as audio and video streaming, boosting growth in the data processing, hosting and other information services segments of the industry. The telecommunications segment is also expected to expand at a faster pace, driven by the increasing amounts of data used by consumers and businesses through mobile devices and fixed Internet services due to the growing popularity of streaming applications, cloud computing, unified communications and cyber security solutions. Renewed growth anticipated in both corporate profits and investment in machinery and equipment (including investment in information and communications technologies) is an additional factor expected to boost business spending on telecommunications services, alleviating some of the weakness anticipated in consumer spending.

The next generation of wireless networks will play a central role as well, with the deployment of 5G technologies in Canada expected to start in a few years as key wireless spectrum for these networks started to be auctioned by the federal government in March 2019. Many blocks of spectrum in the auction are reserved for smaller players in order to encourage more competition in the provision of telecommunications services in Canada. In the long term, 5G networks will result in faster downloads, lower latency, and better performance on various devices, including smart cars and the Internet of Things (IoT), creating new market opportunities. Furthermore, the multiplication of online platforms for audio and video content should continue to support output and employment growth in the motion picture and sound recording segment, while the relatively low value of the Canadian dollar will maintain Canada’s competitiveness as a location for the production of American movies and TV series. On the negative side, the traditional publishing and radio-television broadcasting segments are expected to keep contracting, albeit at a slower pace than the past decade. Both segments should eventually reach a new equilibrium following the significant disruptions caused by the digital revolution.

On average, the industry’s real GDP is projected to increase by 1.6% annually over the period 2019-2028, a notable acceleration relative to the previous ten years. Faster output growth is expected to result in a partial recovery in employment, with job creation averaging 0.5% per year. The telecommunications segment, which represents the backbone of all activities powered by Internet connectivity, is expected to add new positions moving forward, particularly in areas requiring high skills such as IT professionals and data scientists. However, job creation will continue to be contained by the outsourcing and offshoring of customer services operations. A significant part of production growth in the industry is projected to be met by additional gains in productivity, powered by rapid advancement in digital technologies and the fact that telecommunications services, the largest segment of the industry, are highly capital intensive. 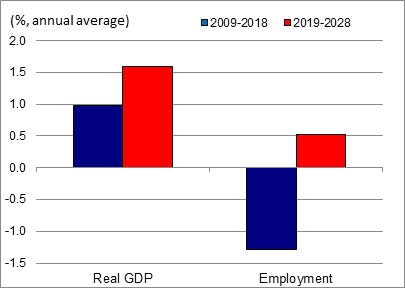