This industry comprises establishments primarily engaged in logging; timber tract operations; forest nurseries; and related support activities such as transportation, reforestation, pest control and firefighting services. Logging and support activities are the two largest segments, accounting for most of production and employment. While direct exports represent a small portion of total revenues, the forestry industry strongly relies on sales from the wood products and paper manufacturing industries which export a large share of their production, mainly to the United States. The industry employed 52,000 workers in 2018, largely concentrated in British Columbia (34%), Quebec (28%) and Ontario (11%), with a workforce primarily composed of men (83%). Key occupations (4-digit NOC) include:

The Canadian forestry and logging industry experienced very modest growth over the period 2009-2018, primarily due to the fallout of the U.S. housing market prior and during the recession of 2008-2009. In addition to massive declines in U.S. housing starts between 2006 and 2009, the use of newsprint grade paper and other forms of paper continued to contract as publishers and readers transitioned to digital outlets, lowering the demand for forestry products. After falling drastically from 2005 to 2009, production gradually recovered from 2010 to 2016, in line with a slow but stable rebound in U.S. housing activity. Renewed growth in the industry’s output was also supported by steady growth in residential investment in Canada during that period and higher timber production in British Columbia to salvage the remaining commercial values of trees that were devastated by the mountain pine beetle infestations. However, output in the industry remained relatively stagnant in recent years, constrained by the worst-ever fire seasons of 2017 and 2018 in British Columbia, the return of U.S. tariffs on Canadian exports of softwood lumber and the significant decline in Canada’s residential investment in 2018. The resulting pace of growth in forestry’s real GDP averaged 0.5% annually for the full period 2009-2018, leaving the current level of production well below its peak of 2005. After falling by 25% from 2005 to 2008, employment decreased by an additional 11% in 2009 and remained relatively stable thereafter, resulting in an average decline of 0.3% annually over the period 2009-2018. The industry was forced to close plants and undertake significant consolidation in response to lower exports of wood products during the collapse of the U.S. housing market. The need to improve cost-competitiveness and boost productivity by adopting new technologies also prevented employment from recovering in subsequent years, despite the rebound in production.

Real GDP in forestry and logging is projected to remain relatively flat (anemic growth) over the period 2019-2028, while employment is projected to keep declining at a similar pace than the previous ten years. Home construction and renovation activity in Canada and the United States will continue to be the main drivers of the industry. However, over the projection period, the demand for wood products will become increasingly constrained by the gradual slowdown anticipated in residential investment in North America and the ongoing shift in the composition of housing starts from single-unit homes toward multiple-dwellings (apartments and condominiums), which require less wood by unit of output. With the recent decline in lumber prices and the return of U.S. tariffs on Canadian softwood lumber, domestic sawmills are also facing more difficulties to export to the U.S. market profitably. Such developments mean that future growth in lumber production relies on the ability of the industry to diversify its export base. While British Columbia has been successful in targeting the Chinese market over the past decade, other provinces have shown little success in targeting markets outside of North America and an emerging Russian lumber industry suggests that competing in the Chinese market will only become tougher. At the same time, reduced supplies of merchantable timber caused by the pine beetle infestations and massive wildfires are expected to scale back production when salvage operations begin to wind down and annual allowable cuts (AAC) are reduced. The negative outlook projected in the pulp an paper industry will also inhibit output growth in the forestry industry.

On a positive note, the emergence of the biomass fuel industry and the increasing use of wood as a “greener” alternative in building construction are expected to support demand for forestry products over the long term horizon. Indeed, mass timber construction represents an important opportunity for Canada’s forestry and logging industry, particularly when considering the underwhelming prospects for North American single-family home construction. Several factors are supporting the growing use of wood in mid- and high-rise buildings, including advances in wood product technology, environmental concerns, and changing building codes. Under this perspective, the industry could benefit from the acceleration anticipated in non-residential building investment over the projection period, alleviating some of the weakness anticipated in residential investment. On average, production is projected to remain stable (0.0% growth) from 2019 to 2028, while employment is projected to keep declining at an annual rate of 0.3%. Further declines in employment reflect additional gains in productivity resulting from automation and the increasing use of machinery. Youth out-migration from rural communities and the growing number of lumbermen in their retirement years will also continue to exert pressures on the industry’s workforce.

Real GDP and Employment Growth Rates in Forestry and Logging 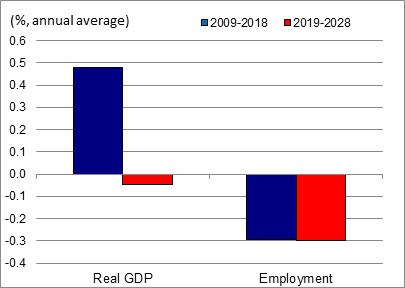