This industry comprises establishments primarily engaged in harvesting fish and other wild animals from their natural habitats. It is composed of commercial inland and salt water fishing (excluding aquaculture which is part of the agriculture industry), as well as commercial hunting and trapping, including the exploitation and management of game preserves. Fishing is by far the predominant economic activity, accounting for almost all of the industry’s production and employment. While direct exports represent a small portion of total revenues, the fishing industry relies heavily on sales from the seafood product preparation and packaging industry which exports about 75% of its production. Main export markets are the United States (56% of exports in 2018) and China (24%). The industry employed 16,400 workers in 2018, mostly concentrated in the Atlantic Provinces (70%) and British Columbia (21%). The workforce is characterized by a high proportion of men (87%) and self-employed (56%). The industry also shows the highest unemployment rate (average of 24% over the past 10 years) across the 42 industries covered by COPS, largely reflecting the seasonal nature of its activities. Key occupations (4-digit NOC) include:

The performance of the fishing industry is largely determined by the availability of the resources. Supply constraints resulting from various quotas and moratorium imposed on different fish species in Canada accounted for some of the biggest challenges the industry has faced over the past decades. These restrictions were in response to overfishing and environmental factors that led to significant decreases of several fish stocks, most notably ground-fish (such as cod and haddock) on the East coast and salmon on the West coast. Stimulated by surging demand from Asian markets, shellfish (lobsters, crabs, shrimps and scallops) have become the main species harvested on the Atlantic coast, filling some of the void left by the 1992 cod fishing moratorium. However, shellfish have also come under pressures recently. For example, due to concerns over increased predation, quotas for northern shrimps were cut for the second year in 2018, a reduction of 78% from 2016. At the same time, the salmon fishery is facing warmer environmental conditions in the Northeast Pacific Ocean, resulting in below average survival, smaller body sizes and declining stocks for most salmon species. Despite remarkable productivity gains, supply constraints have been a major drag on the industry, which saw its output contracted at an average pace of 1.2% annually over the period 2009-2018. The decline in production and the improvement in productivity resulted in significant job losses in the industry, with employment falling by 2.8% annually. While advanced vessel and better fish detection equipment have boosted landings and the cost-effectiveness of fishing operations, limited fish and seafood stocks diverted workers from less-efficient fisheries to other industries.

Supply constraints are expected to continue to limit output growth in the Canadian fishing industry over the projection period. With foreign demand accounting for 90% of total lobster catch, production will be supported by solid demand from the United States and the growing middle class in China and other Asian countries. Canada’s free trade agreements with the European Union and the ten countries in the Asia-Pacific region are good news for the industry, as all tariffs imposed on Canadian fish and seafood products will be removed in these markets over the next fifteen years. This development should be bolstered by an anticipated increase in lobster landings, as warming oceanic temperatures are expected to prompt lobster population to concentrate in more northern areas where water is colder. On the other hand, growth in most other fisheries will continue to be constrained by supply challenges. According to statistics released by the federal government for the period 2011-2017, only one-third of fish stocks in Canada were above their biological production capacity and there has not been any significant improvement suggesting a reversal in this trend.

The sharp reduction of shrimp quotas on the Atlantic coast, which is expected to persist through the short-term, will continue to restrain growth in the industry, while the removal of the cod moratorium is not anticipated any time soon, given the uncertainty surrounding when or if the stock will ever rebound. Also, the recently-amended Fisheries Act represents either a downside or upside risk to the outlook, as fish supply may be restricted by rigorous regulations, although the restoration of fish stocks and fish habitat is certainly a positive outcome for the industry in the long term. Stricter quotas imposed on different species stemming from limited fish stocks and environmental concerns are expected to erase most of the gains resulting from seafood exports, restricting output growth in the industry. On average, real GDP is projected to contract marginally over the period 2019-2028, down by 0.1% annually, while employment is projected to decline at an annual rate of 2.6%. Further declines in employment reflect additional growth in productivity, which is expected to accelerate relative to the past ten years. The emphasis on technical advances is expected to shift toward more efficient and more appropriate fishing gears in order to reduce the negative impacts on the ecological system. Youth out-migration from coastal communities, unfavourable working conditions and the growing number of fishermen in their retirement years will also continue to exert pressures on the industry’s workforce. 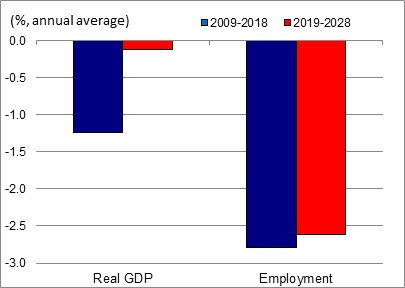