This industry comprises establishments primarily engaged in mining or preparing metallic and non-metallic minerals. It is composed of three segments: coal mining (10% of total production in 2018); metal ore mining (52%); and non-metallic mineral mining and quarrying (38%). The industry exports about two-thirds of its production, mainly to the United Kingdom (25% of exports in 2018), the United States (15%), China (9%) and Japan (8%). It employed 88,600 workers in 2018, with 53% in metal ore mining, 21% in non-metallic mineral mining and quarrying, 11% in coal mining, while the remaining 15% were not associated to any particular segment. Employment is mostly concentrated in Ontario (26%), Quebec (24%), British Columbia (19%) and Saskatchewan (12%), and the workforce is primarily composed of men (85%). Key occupations (4-digit NOC) include:

Being a price-taker in the global marketplace, the performance of the mining industry is largely governed by world economic and geopolitical conditions that influence commodity prices. The global recession of 2008-2009 led to a dramatic drop in demand and prices of most metals and minerals and forced many Canadian mining companies to shut down or temporarily curb production in order to bring supply into balance with demand. The capacity utilization rate dropped to 55% in 2009 and real GDP fell by 27%, reaching its lowest level since the mid-1990s. Demand from China and other emerging markets, as well as a rebounding U.S. economy, helped to prop up the prices of metals and minerals in 2010 and 2011. It took five years, however, for the industry’s output to fully recover from its pre-recession levels. After peaking in 2011, the prices of metals and minerals fell back gradually as China, which consumes roughly half of the global production of metals, began slowing its rate of industrialization, leading to weaker demand. In 2015, prices had fallen back to the level observed during the recession, making the development of new projects simply not economically viable. As a result of the low-price environment, many companies had to put projects on hold. Nonetheless, production at projects already in operation continued to grow. The resulting pace of growth in real GDP averaged 1.1% annually over the period 2009-2018. All the growth in output came from employment growth, which averaged 1.6% per year. After falling in 2009 and 2010, employment fully recovered in 2011 and posted steady gains thereafter.

Canada’s mining industry is expected to grow modestly over the projection period. Increasing demand, combined with a slowdown in new production capacity across the globe, is expected to tighten the market for mining and help bolster prices. Although they are not expected to return to the levels reached in 2011, the prices for several commodities mined in Canada, such as gold and copper, have increased back in recent years, stimulating new investments in large mining projects across the country. While China is expected to keep influencing metal markets, it is expected that metals used in batteries to power things such as electric vehicles will be in solid demand, further supporting the metallic side of the mining industry. In addition to increased Canadian production capacity in metal mining (such as gold, copper, nickel, zinc, silver, lead, iron ore, etc.), prospects for non-metallic mineral mining are encouraging, largely reflecting steady growth in the production of potash which is used as a fertilizer. As the largest producer of potash in the world due to massive deposits in Saskatchewan, Canada’s mining industry is expected to benefit from the fact that global population will grow faster than the volume of cleared land suitable for agriculture, pushing up demand for higher crop yields. Canada also holds large reserves of sand, gravel and stone, with Ontario and Alberta being the largest producers. The demand for such minerals is largely influenced by construction activity in North America.

On average, real GDP in the mining industry is projected to grow at annual rate of 0.7% from 2019 to 2028, with most of the growth occurring in the first half of the projection period, which coincides with the ramp-up in production of new large projects. Softer output growth and a turnaround in productivity growth during the last five years of the projection are the main factors behind the significant slowdown in employment growth, which is expected to average 0.6% annually. Further developments in GPS surveying, three-dimensional data maps, airborne technologies, remote-operated equipment, automated loading and transportation systems, and robotics and seismic mapping, are expected to strengthen productivity and reverse the negative pace of growth recorded during the period 2009-2018. 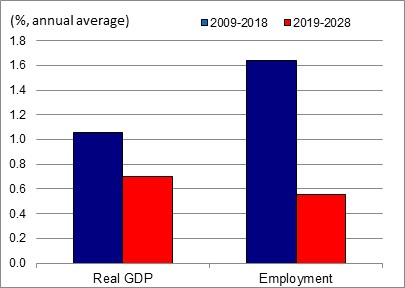