This industry comprises establishments primarily engaged in constructing, repairing and renovating buildings and engineering works, and in subdividing and developing land. These establishments may operate on their own account or under contract to other establishments or property owners. They may produce complete projects or just parts of projects. The industry is composed of three segments: construction of residential and non-residential buildings (industrial, commercial and institutional); heavy and civil engineering construction (such as highways, bridges, utility systems, mining, oil and gas facilities); and specialty trade contractors (such as masonry, painting and electrical work). Construction activities are oriented toward the domestic market and primarily driven by residential and non-residential investment, which is particularly sensitive to fluctuations in economic and financial conditions as well as demographic trends in Canada. The industry employed 1.4 million workers in 2018 (7.7% of total employment in the economy), with 57% in specialty trade contractors, 32% in residential and non-residential construction, and 11% in heavy and civil engineering construction (see footnote for data on GDP)[2]. Employment is mostly concentrated in Ontario (37%), Quebec (17%), Alberta (17%) and British Columbia (17%). The workforce is characterized by a high proportion of men (87%) and a significant concentration of self-employed (27%). Key occupations (4-digit NOC) include:

The construction industry was a moderate performer for the Canadian economy over the past ten years, with output fluctuating significantly. Prior to the recession of 2008-2009, construction activity was booming, propelled by substantial growth in non-residential investment, particularly in the energy sector for the development of the oil sands in Alberta, and sizeable growth in residential investment, including renovation spending. In 2009, real GDP and employment in the industry were severely impacted by the recession as non-residential and residential investment fell sharply, down by 20% and 7% respectively. The industry quickly recovered in 2010 and posted solid growth until 2014, spurred by substantial increases in capital expenditures on energy projects, while low mortgage rates continued to drive up residential investment. However, the industry’s output fell back in 2015 and 2016, reflecting large declines in non-residential investment, primarily as a result of major investment cutbacks in oil and gas engineering structures due to the sharp decline in crude oil prices and the persistent weakness in natural gas prices. Lower energy prices resulted in delays or cancellations of higher-cost energy projects, ranging from oil sands development in Alberta to the building of liquefied natural gas (LNG) terminals in British Columbia. While output in construction partially recovered in 2017-2018, it remained below its level of 2014 due to the persistent weakness in non-residential investment and the recent decline in residential investment. On average, real GDP in the construction industry grew at annual rate of 1.8% over the period 2009-2018, compared to 1.6% for employment. The modest pace of growth in productivity reflects the fact that the industry has moved toward smaller firms taking on smaller-scale, less productive projects. It also reflects the fact that the industry is highly labour intensive, employing 50% more workers per dollar of output than the average for the entire goods-producing sector.

Over the period 2019-2028, real GDP growth in the construction industry is projected to weaken significantly relative to the previous decade, reflecting slower growth in both residential and non-residential investment. The slower pace of growth anticipated in residential investment reflects a number of developments influencing new home construction, renovation spending and ownership transfer costs (associated with the resale of existing houses). Stricter mortgage rules, high household debt, the declining trend anticipated in household formation and housing starts, and the shift from single- to multi-family homes are all expected to restrain investment in new housing. Renovation spending and ownership transfer costs are also projected to grow at a slower pace, partly due to a softer resale market (in 2018, Canadian home resale prices fell for the first time in a decade). While mortgage rates remain low, any potential increases in the rates over the long term horizon (in response to inflationary pressures resulting from a tighter labour market) could put additional weight on residential investment.

The slowdown anticipated in non-residential investment is an additional factor expected to weigh on construction activity. However, this situation essentially reflects anemic growth in business investment related to engineering structures, particularly from the resources extraction industries in response to a tepid outlook for crude oil prices. In contrast, growth in non-residential investment related to industrial and commercial building construction is expected to accelerate, partly in response to high industrial capacity utilization rates, low office vacancy rates in the Toronto and Vancouver areas (the lowest across North America), and robust demand for warehouse space due to the growing adoption of e-commerce. The federal government’s infrastructure program ($186 billion over 12 years) is also expected to support the construction of public engineering structures and institutional buildings. In addition to transportation, public transit, green and rural infrastructures, this program also includes spending on “social infrastructure” such as early learning and child care facilities, affordable housing, home care, and cultural and recreational infrastructure. Finally, despite a tepid outlook for business investment in engineering structures, construction activity could benefit from a number of potential projects in the energy sector, including the development of additional pipelines and the building of liquefied natural gas (LNG) terminals.

The resulting pace of growth in real GDP for the construction industry is projected to average 1.1% annually over the period 2019-2028, down from 1.8% in the previous ten years. Softer production growth and faster productivity growth are the two factors behind the notable slowdown in employment growth, which is projected to average 0.5% annually. The acceleration in productivity growth is expected to come from the residential component. Demographic changes and increased urbanization have led to a shift in the composition of housing starts from single-unit homes toward multiple-dwellings (apartments and condominiums). Two-thirds of homes built in Canada are now multi-family homes, compared to half in the mid-2000s. Because multiple-dwellings are more capital intensive and require less labour by unit of output, productivity is expected to increase at a faster pace in the construction industry. 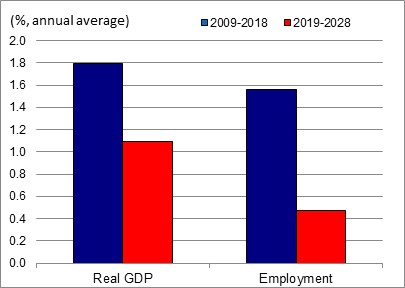 [2]The breakdown for real GDP within the construction industry does not correspond to the NAICS codes, because GDP data are based on capital expenditures. According to this exclusive breakdown, residential and non-residential buildings construction accounted for 51% of the industry’s real GDP in 2018, compared to 18% for repair construction and 31% for engineering and other construction activities. Back to text.