This industry comprises establishments primarily engaged in providing support services, on a contract or fee basis, required for the mining and quarrying of minerals and for the extraction of oil and gas, such as drilling activities. It also includes establishments engaged in the exploration for minerals, other than oil and gas, such as taking ore samples and making geological observations at prospective sites. The industry is essentially oriented toward the domestic market as most of its production is supplied within the country. It employed 91,700 workers in 2018, mainly concentrated in Alberta (68%), followed distantly by British Columbia (9%) and Saskatchewan (9%), with a workforce primarily composed of men (85%). Key occupations (4-digit NOC) include:

The performance of the industry is closely related to capital spending in exploration and extraction activities from the mining and fuel industries. The fuel industry represents the most important contributor, with output in support activities from oil and gas extraction about four times the output in support activities for mining. The number of wells in operation and new drilling projects are key drivers for support activities and both are highly dependent on the prices of oil, gas, metals and minerals, which in turn are driven by global demand for energy and commodity products. The surge in prices recorded prior to the global recession of 2008-2009 resulted into major investments in the fuels and mining sectors, leading to a burst in various support activities, such as drilling, excavating, building and pumping wells for oil and gas field operations. While production fell temporarily in 2009 as a result of a cyclical contraction in commodity prices and investment, it quickly recovered during the following two years and continued to experience positive gains until 2014. However, the industry was severely affected by the sharp fall in crude oil prices that occurred in 2014-2015. As a result of major investment cutbacks from oil producers, output in the industry fell drastically in 2015-2016, recording a cumulative decrease of 46% in only two years. While output partially recovered in 2017-2018, in line with a marginal rebound in oil prices, investments remained well below the levels observed in 2014. The oil prices shock and the persistent weakness in the prices of natural gas resulted into negative GDP growth in the industry for the full period 2009-2018, with declines averaging 1.7% annually. Employment also contracted significantly during that period, down by 1.2% per year, reflecting massive job losses from 2013 to 2017. The decline in employment was, however, less severe than the decline in real GDP, resulting in negative productivity growth within the industry over the past ten years.

Over the period 2019-2028, real GDP growth in support activities is projected to return to positive territory, averaging 0.4% annually. While this appears to be a significant improvement relative to the previous ten years, it is somewhat misleading since the sharp contractions recorded in output in 2015 and 2016 significantly lowered the last ten-year average. After increasing modestly in 2017 and 2018, output in the industry is expected to contract again in 2019 and experience limited growth over most of the projection period, primarily reflecting a tepid outlook for crude oil prices and for investment in new oil sands projects. Indeed, the slowdown anticipated in global economic growth, combined with soaring U.S. shale production and the lack of adequate pipeline capacity, will continue to weigh on energy prices and investment. Total investment in the oil and gas industry fell by 52% between 2014 and 2018 and is expected to decline again in 2019. The fact that production cuts in Alberta have been extended until December 2020 (in order to stabilize prices and reduce the differential between U.S. and Canadian oil prices) is an additional factor weighing on drilling activity and investment decisions in the short-term. Major foreign companies have been leaving and uncertainty about future policy and the completion of new pipeline capacity is undermining business confidence. In the future, any new big project is likely to face fierce opposition from environmental groups and from a segment of the Indigenous stakeholders, making projects more difficult to justify and adding unpredictable delays to their timelines. This shift in public opinion was reflected in the recent introduction of the federal carbon tax and stricter legislation concerning environmental assessment.

Despite those challenges, there are currently five oil sands projects under construction in Alberta, including three major projects to be completed by 2023. There are also two major investment projects related to the production of liquefied natural gas (LNG): the $40 billion-LNG Canada project in British Columbia and the $10-billion Goldboro project in Nova Scotia. If successful, these projects will allow Canada to ship liquefied natural gas to new markets overseas, boosting revenues and stimulating further investment in the gas industry. Such developments in the oil and gas industry, along with additional investment from the mining industry, are expected to support growth in support activities over the projection period. The modest rebound anticipated in production is expected to lead to renewed growth in employment over the period 2019-2028, with gains averaging 1.5% annually. However, real GDP and employment in the industry are projected to remain well below the levels observed in 2014. In the meanwhile, productivity is expected to keep declining, albeit at a slower pace than the previous ten years. 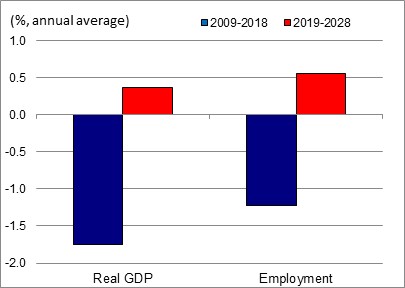