This industry comprises establishments primarily engaged in manufacturing products from wood. It is composed of three different segments: sawmills and wood preservation (39% of total production in 2018); veneer, plywood and engineered wood products (29%); and other wood ducts such as doors, windows and frames (32%). Overall, about 50% of the industry’s production is shipped abroad, mostly to the United States which accounts for 80% of exports. China is the second largest export market, although the share of that country in Canada’s wood exports declined from 14% in 2011 to 7% in 2018. The three segments of the industry do not face the same degree of exposure to domestic and foreign economic conditions. Sawmills and wood preservation along with veneer, plywood and engineered wood products are highly dependant on foreign demand, with exports accounting for 64% and 55% of production respectively. In contrast, other wood products are more sensitive to domestic demand with 77% of production sold within the country. The industry employed 106,500 workers in 2018 (6.2% of total manufacturing employment), with 36% in sawmills and wood preservation, 17% in veneer, plywood and engineered wood products, and 47% in other wood products. Employment is mostly concentrated in Quebec (33%), Ontario (25%) and British Columbia (22%), and the workforce is primarily composed of men (81%). Key occupations (4-digit NOC) include:[3]

The collapse of the U.S. housing market and the ensuing global recession strongly affected the Canadian wood products industry from 2006 to 2009, with real GDP and employment recording cumulative drops of 32% and 26% respectively, primarily due to substantial declines in exports. The industry experienced significant consolidations during that period, as many firms could not remain competitive and were forced to shut down. From 2010 to 2017, output progressively recovered, driven by improving conditions in U.S. housing starts and a booming Chinese market, which stimulated the demand for wood products. Production contracted slightly in 2018 due to lower residential investment in Canada. As for employment, it continued to decline in 2010 and remained relatively stable from 2011 to 2015, before falling again from 2016 to 2018, down by 28%. On average, real GDP grew by 1.0% annually over the period 2009-2018, while employment fell by 4.3%. During that period, the industry lost 59,400 workers, representing 36% of its workforce. This means that all the growth in output came from substantial gains in productivity, arisen from a significant pick-up in investment in machinery and equipment, technological innovations in sawmills, increasing concentration of businesses, larger economies of scales, and higher value added through product development, particularly for wood fibre.

Over the period 2019-2028, real GDP growth in the wood products industry is projected to weaken marginally relative to the previous ten years, while employment is projected to keep declining, albeit at a much slower pace. Obviously, the factors influencing the performance of this industry are very similar to those influencing the forestry industry. The demand for a variety of wood products, ranging from lumber and panels to windows and doors, will continue to be supported by home construction and renovation activity in both Canada and the United States. However, the demand for such products will become increasingly constrained by the gradual slowdown anticipated in residential investment in North America and the ongoing shift in the composition of housing starts from single-unit homes toward multiple-dwellings (appartments and condominiums) which require less wood by unit of ouput. With the recent decline in lumber prices and the return of U.S. tariffs on Canadian softwood lumber, domestic sawmills are also facing more difficulties to export to the U.S. market profitably. Such developments mean that future growth in the industry relies on the ability to diversify its export base. While British Columbia has been successful in targeting the Chinese market over the past decade, other provinces have shown little success in targeting markets outside of North America and an emerging Russian lumber industry suggests that competing in the Chinese market will only become tougher. At the same time, timber supply constraints, particularly in British Columbia and Quebec, are also expected to restrain investment decisions of Canadian firms, curtailing the industry’s potential to produce and export lumber.

On a positive note, the increasing use of wood as a “greener” alternative in building construction is expected to support demand for wood products over the long term horizon. Indeed, mass timber construction represents an important opportunity for the industry, particularly when considering the underwhelming prospects for North American single-family home construction. Several factors are supporting the growing use of wood in mid- and high-rise buildings, including advances in wood product technology, environmental concerns and changing building codes. Under this perspective, the industry could benefit from the acceleration anticipated in non-residential building investment over the projection period, alleviating some of the weakness anticipated in residential investment. On average, production is projected to grow by 0.8% annually from 2019 to 2028, while employment is projected to keep declining, albeit at a much slower pace of 0.4% annually, as a weaker investment outlook is expected to result in slower productivity growth relative to the past ten years. Advancements in harvesting technologies, transport management and data analytics will continue to weigh on employment and maintain a competitive advantage on domestic and foreign markets. 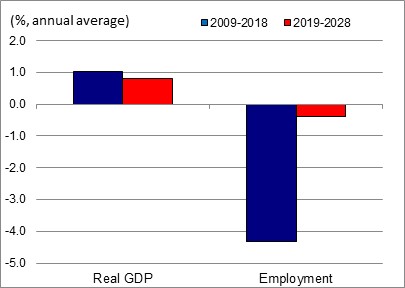