This industry comprises establishments primarily engaged in manufacturing pulp and paper as well as converted paper products (such as paperboard boxes, corrugated boxes, fibre boxes and sanitary food containers). Pulp and paper is the most important of the two segments, accounting for 67% of production in 2018. Overall, the industry is export intensive as more than two-thirds of its revenues come from foreign markets, largely from the United States. The two segments, however, do not face the same degree of exposure to domestic and foreign economic conditions. Converted paper is highly dependent on domestic demand, with 69% of its production sold within the country. In contrast, pulp and paper is far more sensitive to foreign demand, with exports accounting for 87% of its production, largely shipped to the United States (50% of exports) and China (25%). The industry employed 60,200 workers in 2018 (3.5% of total manufacturing employment), with 67% in pulp and paper and 33% in converted paper products. Employment is mainly concentrated in Quebec (35%), Ontario (32%) and British Columbia (15%), and the workforce is primarily composed of men (83%). Key occupations (4-digit NOC) include:[3]

The industry has been through difficult times since the early 2000s as the rapid increase in the digitization of information and media has led to a long-term structural decline in demand for various paper grades, including newsprint. Moreover, stronger competition from abroad, notably from South American producers, combined with the significant appreciation of the Canadian dollar (prior to 2014), left many pulp and paper mills facing competitiveness challenges. These problems were compounded by the collapse of the U.S. housing market, which led to numerous closures in domestic sawmills. Sawmill closures damaged supply chains further downstream, hampering the ability of many pulp and paper mills to gain a steady supply of key inputs into their own production processes. These factors, combined with the global recession of 2008-2009, forced firms to undertake major restructuring by consolidating and upgrading facilities and closing less efficient plants through mergers and acquisitions. After falling almost continuously from 2007 to 2013, real GDP in the industry improved modestly in 2014-2015 and remained relatively stable in recent years, supported by the gradual re-orientation of production toward segments that have stronger demand profiles, such as paperboard, paperboarb containers and sanitary paper products. Employment, however, continued to contract as productivity gains were notable, supported by improving per-worker investment into machinery and equipment. On average, real GDP and employment fell at annual rates of 1.6% and 3.9% respectively over the period 2009-2018. During that period, the industry lost 30,000 workers, representing about one-third of its workforce.

Production and employment in the paper manufacturing industry are projected to keep declining over the period 2019-2028, albeit at a slower pace than the previous ten years. Most of the small decline in production is expected to occurred in 2019 as a result of lower exports to China. Thereafter, production is expected to remain relatively stable, as exports should continue to benefit from a relatively low Canadian dollar, a robust U.S. economy, and further expansion into niche market opportunities. Since most of paper products are priced in U.S. dollars, a weaker currency tends to increase the effective price Canadian firms receive for their products, boosting revenues and profitability. At the same time, exports will no longer face the headwind of U.S. duties on Canadian glossy paper and newsprint. Beyond the U.S. market, exports could benefit from growing opportunities in Asian markets, although declining trade relations with China could temper growth in the near-term. While the predominance of electronic media will continue to reduce demand for traditional paper and newsprint, the rise in retail e-commerce sales, both globally and in Canada, is expected to boost demand for packaging materials, supporting the production of paperboard and paperboard containers. The outlook for sanitary paper products also remains positive, supported by rising demand in both emerging and mature markets.

On the negative side, growing production from competing suppliers in South America and Asia will keep putting pressures on Canadian manufacturers to consolidate operations, as firms in these regions are able to produce at lower costs and can also benefit from their closer proximity to key emerging markets. Moreover, timber supply constraints in Canada and the return of U.S. tariffs on Canadian exports of softwood lumber are expected to hurt domestic lumber production and boost the price of this key input for paper manufacturing. Lastly, carbon pricing policies and the phase-out of fossil fuels in the electricity sector are expected to drive up energy costs and restrain the global competitiveness of the Canadian paper industry, which is six times more energy intensive than the manufacturing average. On average, real GDP in paper manufacturing is projected to decline marginally from 2019 to 2028, down by 0.3% annually, a notable improvement relative to the previous ten years. This should help mitigate the severity of future employment declines to an annual rate of 1.4%, although retirements and automation will continue to put downward pressure on the size of the industry’s workforce throughout the projection period. Indeed, an aging workforce is expected to result in an increasing number of retirements, while jobs consisting of repetitive and routine tasks, such as those performed by labourers and operators, should continue to be replaced by machinery. 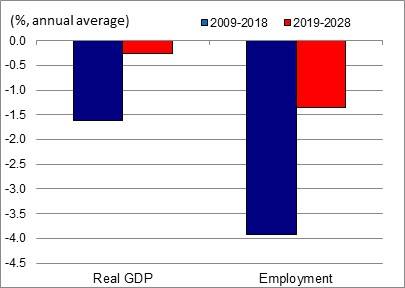