This industry comprises establishments primarily engaged in making goods by processing raw rubber (such as tires and inner tubes, hoses and belts, shoe and boot parts, latex products) and plastics materials (such as plastic resins, plastic packaging, polystyrene and urethane foam, plastic pipes, plastic bottles). Plastics are the largest of the two segments, accounting for 85% of production in 2018. Overall, close to half of the industry’s production is exported. The two segments, however, do not face the same degree of exposure to domestic and foreign economic conditions. Plastics are largely dependent on domestic demand, with 56% of production sold within the country. In comparison, rubber products are more sensitive to foreign demand, with exports accounting for 70% of production, 93% of which are shipped to the United States. The industry employed 98,600 workers in 2018 (5.7% of total manufacturing employment), with 80% in plastics and 20% in rubber products. Employment is mostly concentrated in Ontario (46%) and Quebec (32%), and the workforce is largely composed of men (74%). Key occupations (4-digit NOC) include:[3]

Demand for plastics and rubber products is heavily tied to the North American manufacturing supply chain, making it particularly sensitive to business cycles. The industry was already struggling before being hit further by the the global recession of 2008-2009. After peaking in 2005, production declined by 30% in the following four years. Underpinned by the recovery in manufacturing and housing activity in Canada and the United States, output increased back from 2010 to 2018, progressively returning to its pre-recession levels. The resulting pace of growth in real GDP averaged 1.8% annually over the period 2009-2018. After declining markedly from 2006 to 2012, employment in the industry stabilized from 2013 to 2016, before increasing marginally in 2017-2018. This resulted in a net employment decline averaging 0.5% annually for the entire period 2009-2018. The industry posted among the strongest gains in productivity across the manufacturing sector (1.4% annually), reflecting further automation of the production process and the adoption of more advanced technologies such as 3D printing.

Over the projection period, growth in the plastics and rubber industry is expected to be primarily driven by the acceleration anticipated in manufacturing activity in Canada and a positive outlook for exports, spurred by a relatively low Canadian dollar, additional growth in U.S. demand for new housing, and the increasing use of automotive plastics. The signing of the new Canada-U.S.-Mexico Agreement (CUSMA) has reduced uncertainty about access to the industry’s largest export markets, while free trade agreements with the European Union and several Pacific Rim countries are facilitating new export opportunities. The growing middle class in large markets such as China and India is also expected to increase demand for automobiles and airplanes, which are large users of plastic and rubber parts. Major restructuring undergone in the past decade has enabled the industry to become a major force in global markets and this welcome development should help to increase exports to emerging markets.

Furthermore, technological developments have led to growing demand for plastics as a substitute for metals. For example, plastics are now being use more intensively in electronics, while efforts to reduce vehicle weight and fuel efficiency will continue to support greater use of plastics in automotive (which are lighter than traditional metal parts). According to Global Market Insights[4], global demand for automotive plastics is estimated to increase from US$24 billion today to US$50 billion by 2024. This should help to offset the gradual slowdown anticipated in motor-vehicles sales and new housing activity in North America over the projection period. On the negative side, the environmental effects of plastics are encouraging consumers, businesses and countries to reduce their utilization of single-use plastics and increase the life cycle of existing plastic products. Plastic producers that fail to adapt to this new environment could see their competitiveness erode. On average, real GDP in plastics and rubber products is projected to grow by 2.0% annually over the period 2019-2028, a slight acceleration relative to the previous ten years. Faster growth in production is expected to result in renewed employment growth, with job creation averaging 0.6% annually. After going through major structural changes to remain competitive, the industry is expected to record additional growth in productivity, albeit at a slower pace than the past decade. 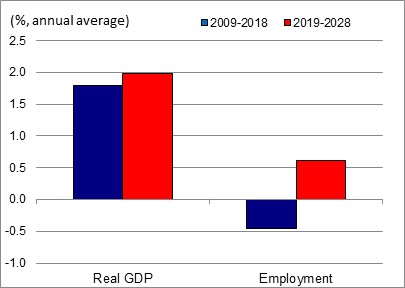