This industry comprises establishments primarily engaged in manufacturing ferrous and non-ferrous metal products (such as hand tools, architectural and structural products, boilers, tanks and shipping containers, springs, wires, bolts and screws) and establishments producing industrial and commercial machinery (used in the production process of various primary, construction, manufacturing and services industries). Production in the industry is evenly split between its two segments: fabricated metal products (48% in 2018) and machinery (52%). Overall, the industry is export intensive as around 60% of its production is shipped to foreign markets. The two segments, however, do not face the same degree of exposure to domestic and foreign economic conditions. Metal fabrication is highly dependent on domestic demand, with 71% of its production sold within the country. In contrast, machinery is far more sensitive to foreign demand, with exports accounting for about 90% of its production, 74% of which are shipped to the United States. Overall, the industry employed 269,700 workers in 2018 (15.6% of total manufacturing employment), with 56% in metal fabrication and 44% in machinery. Employment is mostly concentrated in Ontario (43%), Quebec (25%) and Alberta (13%), and the workforce is primarily composed of men (84%). Key occupations (4-digit NOC) include:[3]

The industry primarily relies on business investment in machinery and equipment as well as activity in the primary, construction and manufacturing sectors, which are the largest users of metal products and machinery. Because those three sectors are very sensitive to business cycles, so is the fabricated metals and machinery industry. During the global recession of 2008-2009, production declined by 20%, while employment fell by 37,000 on the heels of the 24,000 jobs that were lost in 2006 and 2007. Stimulated by the economic recovery in North America, and more particularly by the rebound in manufacturing and construction activity, real GDP fully recovered from 2010 to 2014. However, the industry’s output fell again in 2015 and 2016, as business investment in machinery and equipment (M&E) and engineering structures fell sharply in Canada and slowed significantly in the United States, following the collapse in crude oil prices. Production increased back in 2017-2018, primarily stimulated by the rebound in M&E investment in North America. The resulting pace of growth in real GDP over the entire period 2009-2018 averaged 1.4% annually. In comparison, employment declined at an average rate of 0.5% annually, leaving the total number of jobs in the industry well below the level observed in 2005. After falling for a fifth consecutive year in 2010, employment rebounded modestly in 2011 and remained relatively stable in subsequent years, despite the increase in output. This reflected the need to improve productivity in response to the intensification of global competition, particularly from China which has become a major exporter of machinery equipment.

Over the projection period, the industry is expected to benefit from renewed growth in M&E investment and faster growth in manufacturing activity in Canada, along with additional growth in construction activity and a positive outlook for exports. After experiencing mitigate growth in M&E investment over the past decade, Canadian businesses are expected to replace or upgrade their existing capital stock in response to the development of new productivity-enhancing technologies and demographic pressures on labour supply. Those factors are projected to result in a sharp pick-up in M&E investment in Canada over the next decade, boosting domestic demand for industrial and commercial machinery. Domestic demand for fabricated metals and machinery is also expected to be driven by the acceleration projected in the construction of non-residential buildings and major investments in public infrastructure from the federal government, alleviating some of the weakness anticipated in business investment related to engineering structures, notably from the oil and gas extraction industries. At the same time, exports are expected to benefit from robust U.S. demand for machinery and equipment, the relatively low value of the Canadian dollar, and the recent decision from the U.S. administration to remove tariffs on steel and aluminum imported from Canada. The signing of the Canada-U.S.-Mexico Agreement (CUSMA) should also ensure tariff-free access to the key U.S. market over the long term, although the gradual slowdown anticipated in vehicles sales in North America is expected to temper the demand for fabricated metals.

Finally, efforts to reduce greenhouse gas emissions are expected to lead to significant investment to develop cleaner power generation and production techniques, supporting the industry sales both in Canada and abroad. As investment in M&E continues to ramp up to improve productivity, neutralize labour shortages and reduce carbon emissions, the industry will have the opportunity to play a significant role in developing the next-generation of machinery. The resulting pace of growth in real GDP is projected to accelerate significantly over the period 2019-2028, averaging 2.1% annually, the strongest growth rate across all manufacturing industries. Faster growth in production is expected to lead to a notable rebound in employment, with job creation averaging 1.0% annually. However, a significant part of output growth is expected to be met by additional gains in productivity. Additive manufacturing, which refers to technologies that build three-dimensional objects by adding multiple layers of material, could potentially revolutionize how several fabricated metal products are created, reducing waste in production and improving efficiency. Although many jobs associated with repetitive and routine tasks are expected to be threatened by increased automation, there could be stronger demand for skilled workers who can operate more complex machinery used in the manufacturing process. 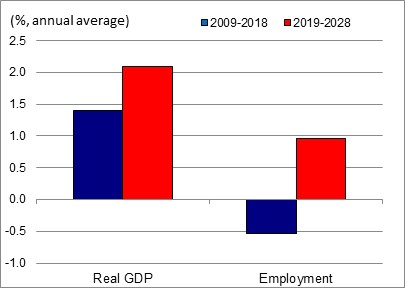