This industry comprises establishments primarily engaged in providing short-term lodging to travellers and vacationers in facilities such as hotels, resorts, motels, bed and breakfast homes, and cottages and cabins. These establishments may offer complementary services, such as food and beverages, recreational services, conference rooms and convention services, laundry and parking services. The industry also includes establishments operating recreational vehicle (RV) parks and campgrounds (including hunting and fishing camps); and establishments operating rooming and boarding houses, which may serve as a principal residence for the period of occupancy. Traveller accommodation is by far the largest of the three segments, accounting for 91% of employment in 2018, followed by RV parks and recreational camps (8%), and rooming and boarding houses (1%). The 4-digit NAICS breakdown for GDP is not available. Overall, the industry employed 189,300 workers in 2018, mostly concentrated in Ontario (34%), Quebec (21%), British Columbia (16%) and Alberta (12%), with women accounting for the majority of the workforce (58%). The industry is also characterized by much lower wages than the overall economy average and a significant proportion of part-time workers (22%). Key occupations (4-digit NOC) include:

*Also include many occupations related to the food services industry:

Accommodation services are heavily reliant on tourism activity and business travel, which in turn are driven by consumer spending and business activity both from the domestic and foreign sides (domestic tourism accounts for about 60% of total revenues). Consequently, the industry is particularly sensitive to fluctuations in domestic and foreign economic conditions, travelling costs, and the value of the Canadian dollar. After being negatively affected by the global recession of 2008-2009, output in the industry fully recovered in 2010 and increased continuously over the following eight years, with the exception of a temporary decline in 2015 that was fully reversed in 2016. Growth in output was particularly strong in 2017-2018, as tourism activity benefited from multiple factors, including a notable acceleration in consumer spending attributable to robust labour markets in both Canada and the United States; major events related to the 150th anniversary of the Canadian Confederation and the 375th anniversary of Montreal; and the recognition of Canada as the best travel destination by Lonely Planet and the New York Times in 2017. Lower fuel costs and the sharp depreciation of the Canadian dollar in 2014-2015 have also contributed to improve tourism activity and increase domestic and foreign demand for accommodation services. Indeed, lower fuel costs have resulted in lower air and ground transportation fares, while a lower currency has attracted a large number of foreign tourists to Canada, particularly Americans, and encouraged more Canadians to choose vacation within the country.

The resulting pace of growth in the industry’s real GDP averaged 1.6% annually over the past decade. After peaking in 2011, employment in accommodation services fluctuated significantly from year to year, but remained on a downward trend, leading to a net annual decline of 0.5% for the whole period 2009-2018. Technological innovations, such as online hotel bookings, have played an important role in reducing labour demand and increasing productivity. Growing competition from new business models like Airbnb, Vrbo, HomeAway and FlipKey has also amplified the need to contain operating costs in the industry. Many of the rentals found through those digital platforms are less expensive than hotels and often offer a more unique experience than traditional accommodations, thereby appealing to budget-conscious travellers. According to Statistic Canada[10], revenues from those types of private short-term accommodation services have surged in recent years, from $265 million in 2015 to $2,760 million in 2018, with Airbnb and other private short-term rentals accounting for 18% of the inventory for accommodations in Canada.

Over the period 2019-2028, output in accommodation services is expected to expand at a similar pace as the past decade, primarily supported by additional growth in tourism activity and a pick-up in business travel. Tourism activity should continue to benefit from a favourable currency situation, low transportation costs, and robust labour markets in the United States and Canada, at least in the short- to medium-term. Over the longer term, Canada will be among the three countries to co-host the 2026 FIFA World Cup (with the United States and Mexico), and this is also expected to increase the number of international visitors. In the meanwhile, the industry should benefit from massive retirements of baby-boomers from the labour market, as this large and relatively well-off demographic group will have more time to spend on tourism activities. Baby-boomers are expected to inherit $750 billion in wealth and assets over the next ten years, providing another source of income to spend on travel and accommodation services. This will help to compensate for the slower pace of growth projected in disposable income and consumer spending resulting from the gradual slowdown in the working-age population. High household debt levels (and any potential increases in interest rates over the longer term horizon in response to inflationary pressures resulting from a tighter labour market) are also expected to put pressures on household budgets, restraining discretionary spending on tourism activities. In light of the gradual slowdown projected in consumer spending in Canada and the United States, tourism activity is expected to be increasingly reliant on overseas travellers, particularly from emerging economies where demand for travelling is rising in line with higher incomes. Compared with U.S. tourists, overseas travellers tend to stay longer in Canada and spend more. For example, the number of tourists from China surged in recent years and outpaced all other overseas countries in terms of spending, with an estimated one in five dollars spent by overseas tourists now originating from China. Mexico, India and South Korea have also recorded double-digit growth in the number of visitors to Canada over the past five years. In addition to tourism activity, business travel is also expected to support demand for accommodation services, stimulated by renewed growth in corporate profitability in Canada, a robust U.S. economy, and various trade deals such as the Comprehensive Economic Trade Agreement (CETA) with the European Union. However, the slowdown anticipated in global economic growth and threats of greater protectionism and tighter border control could curtail trade and travel between countries.

On average, the industry’s real GDP is projected to increase by 1.6% annually over the period 2019-2028, while employment growth is projected to return to positive territory, averaging 0.6% per year. The modest rebound in employment reflects the fact that the industry is highly labour intensive and that most of the adjustments to technological innovations (such as online booking) and new business models (such as Airbnb) are expected to be completed. However, strong labour turnover suggests difficulties in retaining and attracting workers due to the seasonal nature of activities and much lower wages relative to other industries. Indeed, average weekly earnings are about 50% lower than the average for the entire service sector. Given the weaker pace of growth anticipated in Canada’s labour supply and the gradual tightening of the labour market, fewer people will be looking for work, especially for low wage and/or part-time work. As a result, it will be increasingly challenging for accommodation services providers to compete with other industries to attract workers, forcing businesses to continue to improve their level of productivity. Airbnb and its counterparts operate with a much smaller number of workers and are therefore less concerned with attracting or retaining labour. 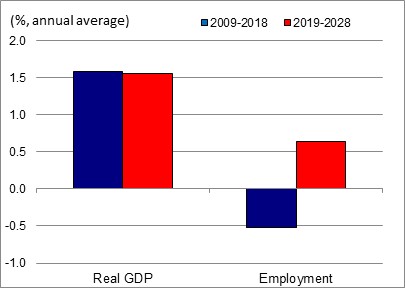