This industry comprises establishments not classified in any other manufacturing industries. These establishments manufacture a diverse range of products, including medical equipment and supplies (such as blood transfusion equipment, surgical instruments, dental equipment, eyeglasses, contact lenses, prosthetics and wheel chairs) and miscellaneous products (such as jewellery and silverware, sporting and athletic goods, toys and games, and office supplies). Miscellaneous products are the largest of the two segments, accounting for two-thirds of production in 2018. Overall, about 50% of the industry’s production is shipped to foreign countries, primarily to the United States which accounts for 70% of exports. The industry employed 116,600 workers in 2018 (6.7% of total manufacturing employment), with 82% in miscellaneous products and 18% in medical equipment and supplies. Employment is mostly concentrated in Ontario (55%), Quebec (18%) and British Columbia (11%), and the workforce is mainly composed of men (63%). Key occupations (4-digit NOC) include:[3]

Since the products manufactured by the industry are largely utilized by consumers and businesses, production is primarily tied to household consumption and business spending. Furthermore, many of the industry’s products can be classified as recreational or leisure goods, making demand for such products very sensitive to discretionary expenditures and business cycles. As a result, production and employment in the industry fell markedly during the global recession of 2008-2009, mainly reflecting lower demand for products in the miscellaneous segment due to rapid declines in discretionary income and corporate profits. After recovering in 2010-2011, driven by the release of the pent-up demand accumulated during the recession, output in the industry fell again from 2012 to 2014, partly in response to growing household debt and lower business confidence. Production increased back from 2015 to 2018, stimulated by a rise in exports following the significant decline in the value of the Canadian dollar, and by a strong acceleration in household consumption attributable to robust labour markets in both Canada and the United States. However, the large fluctuations in the industry’s output over the past ten years resulted in anemic growth (0.0%) in real GDP for the entire period 2009-2018. In comparison, employment increased by 3.5% annually, with two-thirds of the gains occurring during the notable rebound in production from 2015 to 2018. Negative growth in productivity primarily reflects softer capital spending in the industry over the past decade and the fact that a large number of firms are relatively small and highly labour intensive.

A better outlook is expected for the industry’s output over the period 2019-2028, primarily driven by growing demand for medical equipment and supplies and stronger exports. The low value of the Canadian dollar should help maintain the industry’s competitiveness on export markets, particularly in the United States. It is also expected to encourage domestic sales by increasing import prices and improve competitiveness relative to low cost countries, particularly China which accounts for the largest share of Canadian imports of recreational and leisure products. The signing of the Canada-U.S.-Mexico Agreement (CUSMA) represents an additional leverage, given the significant amount of the industry’s exports to the United States. Medical equipment is projected to be a major contributor to output growth as population aging is expected to lead to stronger demand for health care. Canadian firms have unique expertise in developing and producing the latest health-related equipment and are well positioned to take advantage of growing market opportunities, particularly in developed countries planning to improve their health care infrastructure. On the negative side, the industry will be challenged by the fact that growth in consumer spending is projected to weaken progressively in Canada and the United States due to slower growth in disposable income (resulting from slower growth in the working-age population and massive retirements of baby-boomers). High consumer debt levels are also expected to put pressures on household budgets, restraining discretionary spending on recreational and leisure products. Nevertheless, real GDP growth is projected to return to positive territory over the period 2019-2028, averaging 1.8% annually. Renewed growth in production is expected to result in further, albeit slower, gains in employment, with job creation averaging 0.7% per year. The slower pace of growth in employment relative to the period 2009-2018 reflects a turnaround in productivity, as improved business conditions should lead to greater capital spending over the next ten years. The industry is expected to make increasing use of additive manufacturing, which refers to technologies that synthetize three-dimensional objects. Such technologies have the potential to be applied to a wide range of products, enhancing productivity in the industry. 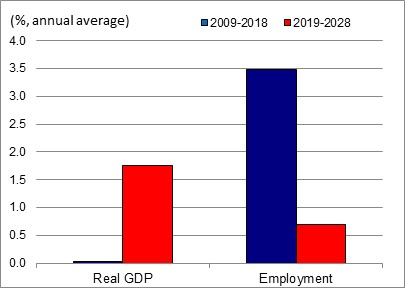