This industry comprises establishments primarily engaged in providing information technologies expertise (such as writing, modifying, testing and supporting software, including the creation of Internet home pages); planning and designing computer systems that integrate hardware, software and communications technologies; providing on-site management and operation of clients’ computer and data processing facilities. It excludes the development and retailing of computer hardware and packaged software. The industry employed 409,100 workers in 2018, mostly concentrated in Ontario (48%), Quebec (25%), British Columbia (13%) and Alberta (8%). The workforce is primarily composed of men (76%) and characterized by a high level of education and a significant proportion of self-employed (25%). Key occupations (4-digit NOC) include:

The industry strongly relies on business investment and government expenditures related to software and information and communications technologies (ICT) in Canada. It is also characterized by a relatively high degree of exposure to trade for a service industry, with about 25% of its revenues coming from exports, mainly to the United States, making it sensitive to the investment environment south of the border. Driven by the growing adoption of computer technology from the private and public sectors and the necessity to adapt their operations to rapid innovations in hardware and software, output in the industry grew continuously since the early 1990s, even during the global recession of 2008-2009, albeit at a slower pace. The increased complexity of ICT systems and the growing use of mobile devices fuelled robust demand for computer services. Cloud computing, Internet of Things (IoT), big data and predictive analytics are now part of many Canadian businesses’ daily operations. Output growth and job creation in the industry was particularly strong in recent years, as the technolocial transformation of finance and insurance services has opened doors to new business opportunities, making financial institutions the largest users of computer services. On average, real GDP and employment increased at annual rates of 4.1% and 4.0% respectively over the period 2009-2018, posting the strongest growth rates in output and employment across the 42 industries covered by COPS. However, productivity growth was quite modest, reflecting the fact that the industry is highly labour intensive and mostly composed of small firms that do not benefit from the same economies of scale as larger companies. Computer services employ 30% more workers per dollar of output than the service sector average and 90% of firms have less than 10 employees. Small firms are common in the industry due to the growing number of businesses that are adopting customized software applications, allowing various niche opportunities for computer services providers.

Over the projection period, computer system design services should continue to outperform all industries in terms of production and employment growth. Demand is expected to be spurred by solid investment in software and information and communications technologies (ICT), reflecting the need for businesses and governments to continually upgrade their ICT systems in order to keep up with the most recent technologies and remain competitive. Indeed, computer services benefit from the constant development of innovative computer and communications products that are designed and serviced by the industry. Cloud-based platforms, Internet of Things (IoT), big data and open source software continue to gain in popularity, while the implementation of 5G networks and further developments in advanced manufacturing, autonomous transport, virtual and augmented reality, artificial intelligence, machine learning, language processing and biometric security represent a multitude of growth opportunities. Consumers and businesses own multiple electronic devices and are increasingly asking for compatibility, transferability and access to their content from any of those devices.

The industry will also continue to benefit from the growing number of firms across the economy that choose to outsource IT work in order to remain focused on their core activities. In many areas, IT investment cannot be delayed, particularly in the area of cybersecurity where threats to private and public targets continue to emerge, warranting significant new investment by any organization that has information to safeguard. Fintech and insurtech applications will keep opening doors to new start-ups, representing niche opportunities within the industry to compete directly with the traditional players in the delivery of finance and insurance services. Increased competition will continue to encourage the incumbent finance and insurance companies to transform their business models and improve their ICT infrastructure, resulting in additional demand for computer services. Simultaneously, the growing amount of data being made publicly available by all government levels through open data initiatives is expected to encourage the private sector to innovate and develop various applications to leverage this large pool of information, leading to the creation of new products and business models in the industry. Finally, a positive outlook for exports, spurred by solid economic growth in the United States and improved price competitiveness due to a relatively low Canadian dollar, is expected to bring more business to Canadian computer services firms. That said, the industry also faces increased competition on the global market, particularly from emerging economies (Canadian imports of computer services from the United States and Europe have increased by 44% over the past decade, compared to 340% for imports from the rest of the world).

The resulting pace of growth in the industry’s real GDP and employment is projected to average 3.7% and 2.3% per year respectively over the period 2019-2028. Although this represents a slowdown relative to the previous decade, particularly in terms of job creation, computer services are expected to keep posting the strongest growth rates in output and employment accross the 42 industries covered by COPS. The slower pace of growth in employment reflects difficulties to recruit highly skilled workers in the industry. According to a survey conducted by the Conference Board of Canada[7], one-third of firms reported difficulty recruiting and/or retaining computer scientists. Professionnals in computer and information systems (NOC 217) had a ratio of 0.8 unemployed worker for every vacant position in 2018, compared to an average of 2.2 for all occupations. In a context where it will be increasingly challenging to hire additional workers, the industry is expected to use its ressources in a more efficient way and adopt the most cutting-edge technologies available in order to boost productivity. 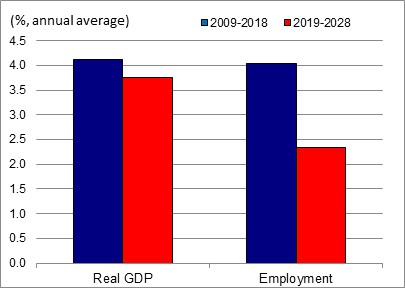 [7]Conference Board of Canada, Filling the Gaps: Recruitment and Retention of Top Talent in Canada, August 2015; Canadian Industrial Outlook, Computer Services, December 2018. Back to text.