This industry comprises establishments primarily engaged in operating electric, gas and water utilities. These establishments generate, transmit, control and distribute electric power; distribute natural gas; treat and distribute water and operate sewer systems and sewage treatment facilities and related systems (such as steam and air conditioning systems). They generally operate through a permanent infrastructure of lines, pipes, treatment and processing facilities. Electric power generation, transmission and distribution are by far the largest of the three segments, accounting for about 80% of production in 2018. The industry is mostly oriented toward the domestic market and is very sensitive to fluctuations in industrial production and construction activity. It employed 144,800 workers in 2018, with 77% in electric power generation, transmission and distribution, 10% in natural gas distribution, and 13% in water, sewage and other systems. Employment is mostly concentrated in Ontario (39%), Quebec (18%), Alberta (16%) and British Columbia (10%). The workforce is primarily composed of men (75%) and benefits from much higher wages than the national average, partly attributable to a high unionization rate. Key occupations (4-digit NOC) include:

After falling significantly in 2009 as a result of the economic downturn, output in electric, gas and water utilities quickly recovered in the following two years, supported by renewed growth in industrial production and construction activity. Output stagnated in 2012 and 2013, and increased continuously thereafter, although the pace of growth was partly restrained by advances in energy efficiency and the decline in the electricity intensity of the Canadian economy (electricity intensity is defined as the quantity of electricity used per dollar of GDP). On average, real GDP in the industry grew at an annual rate of 0.8% over the period 2009-2018, with production growth largely driven by electric power generation, transmission and distribution (54% of GDP growth), followed by natural gas distribution (32%) and water sewage and other systems (14%). After peaking in 2008, total employment in the industry fell continuously from 2009 to 2012 and remained relatively stable from 2013 to 2017, before increasing markedly in 2018, driven by large gains in the electricity segment. The net result was a marginal decline in the workforce averaging 0.1% per year over the period 2009-2018. The employment data suggest that, on average, output growth in utilities was entirely attributable to productivity growth over the past decade. This reflects the fact the industry is highly capital intensive, with its capital stock per employee being six times that of the goods-producing industries. In other words, it requires a much smaller number of workers per unit of output, when compared to the manufacturing and construction industries.

Over the projection period, real GDP growth in the utilities industry is expected to accelerate significantly relative to the period 2009-2018, primarily driven by the electric power segment. While the electricity intensity of the Canadian economy should continue to decline gradually, stronger demand from the industrial and commercial sectors is expected to outpace those efficiency gains. Indeed, the oil and gas industry is expected to push industrial demand higher, as the use of electricity will grow in tandem with higher oil sands production, an energy intensive process. Electricity exports to the United States are also projected to contribute to faster output growth in the utilities industry. Investment in the industry is expected to be supported by mega energy projects in various provinces, including Newfoundland-Labrador (Lower Churchill), Quebec (Romaine Complex), Ontario (Darlington and Bruce Power nuclear stations), British Columbia (Site C Clean Energy) and Manitoba (Keeyask Hydropower). A continued shift toward a low-carbon economy will also create significant opportunities for electricity to gain market share in areas such as transportation. Faster growth in electric power generation, transmission and distribution activities is however expected to be accompanied by slower output growth in natural gas distribution and water, sewage and other systems. Overall, real GDP growth in the utilities industry is projected to average 1.6% annually during the period 2019-2028, twice the pace observed in the previous ten years. Faster growth in output is expected to result in renewed growth in employment, although the pace of growth should remain modest, averaging 0.3% annually. Efforts to control costs and additional gains in productivity, partly resulting from rapid innovations in solar and biomass technologies, will continue to restrain job creation in the industry. 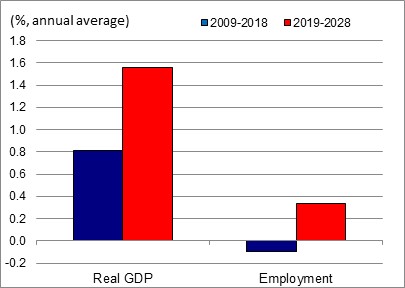