This industry comprises establishments engaged in preparing meals, snacks and beverages for immediate consumption on and off the premises. It is composed of three segments: special food services (caterers and mobile food services); drinking places serving alcoholic beverages (bars and taverns); and full-services restaurants and limited-service eating places (family and fine-dining restaurants, fast food restaurants, coffee shops). It does not include food service activities that occur within establishments such as hotels, civic and social associations, amusement and recreation parks, and theatres. However, leased food-service locations in facilities such as hotels, shopping malls, airports and department stores are included. Full- and limited-services restaurants are by far the largest segment, accounting for 92% of employment in 2018, followed by special food services (5%) and drinking places (3%). The 4-digit NAICS breakdown for GDP is not available. Overall, the industry employed 1.0 million workers in 2018, distributed proportionally to provincial population: 39% in Ontario, 22% in Quebec, 15% in British Columbia, 12% in Alberta and 12% in the remaining provinces, with women accounting for the majority of the workforce (57%). The industry is characterized by much lower wages than the national average and by the largest concentration of part-time workers in the economy, accounting for 44% of its workforce. Food services also provide many young people with their first job, as 44% of workers were aged between 15 and 24. Key occupations (4-digit NOC) include:

Food services are heavily reliant on consumer spending and are particularly sensitive to growth in disposable income and changes in discretionary expenditures. Tourism activity, both from the domestic and foreign sides, is an additional driver of demand, as non-local consumers account for about one quarter of the industry’s revenues. Demand for food services also relies, to a smaller degree, on business spending (e.g. business lunch) and business travel. The industry has been a bright spot for the Canadian economy over the past decade. After declining marginally during and shortly after the recession of 2008-2009, output and employment quickly recovered and increased steadily from 2011 to 2018. Robust growth in consumer spending, stimulated by a healthy labour market, higher disposable income and low interest rates, combined with a growing affinity of Canadians to dine out, have been key drivers behind the industry’s solid performance. The emergence of the fast-casual dining restaurants, which has been able to create a wedge between traditional full-service restaurants and fast food restaurants in terms of costs and quality, is an additional factor that contributed to the expansion of the industry. In contrast, drinking places continued to struggle, loosing 26% of their workforce in the past decade, reflecting changes in social trends, growing health awareness, population aging, and the increasing gap between the price of alcoholic beverages served in bars and those sold in stores.

The sharp depreciation of the Canadian dollar in 2014-2015 attracted a large number of foreign tourists to Canada, particularly Americans, and encouraged more Canadians to choose vacation within the country, increasing demand for food services. Lower transportation costs resulting from lower fuel costs, and major events related to 150th anniversary of the Canadian Confederation and the 375th anniversary of Montreal, also promoted greater tourism activity. On average, real GDP and employment in the industry increased at annual rates of 3.1% and 1.6% respectively over the period 2009-2018, largely outpacing the performance of the overall economy. Despite its high degree of labour intensity, the industry posted notable gains in productivity, particularly in the second half of the past decade when restaurants begun to explore more sophisticated technological innovations. Applications such as self-service ordering kiosks and the ability for customers to place orders and pay via mobile devices have automated operations traditionally involving several steps and personal interaction with clients and among workers. The rise in minimum wages is an additional factor that encouraged firms to adopt new technologies and increase productivity to maintain their profit margins. The industry is also facing indirect competition from the growing popularity of home meal solutions and meal delivery kits, such as those supplied by Goodfood and HomeFresh.

Over the period 2019-2028, food services are not expected to enjoy the same momentum in output growth that they did during the last decade, primarily reflecting the gradual slowdown projected in consumer spending. The industry should continue to benefit from a positive outlook for tourism activity in the short- to medium-term, supported by a favourable currency, low transportation costs, and solid labour market conditions in the United States and Canada. However, over the longer term, the industry will be affected by the adverse impact of demographic changes on consumer spending. Indeed, slower growth in the working-age population is expected to constrain overall employment growth, while the aging of the population will result in massive retirements of baby-boomers from the labour market. These two factors are expected to constrain the pace of growth in disposable income and consumer spending, including discretionary spending on food services. High consumer debt levels (and any potential increases in interest rates over the longer term horizon in response to inflationary pressures resulting from a tighter labour market) are also expected to put pressures on household budgets, reducing discretionary income available for dining out. Moreover, if the dining habits among retiring baby-boomers follow the trends of the previous generation, they are likely to spend more of their food dollars at home as they age. Empirical evidence also shows that older people spend a smaller proportion of their income on food and clothing, particularly once they are retired from the labour market. On the other hand, the aging of Canada’s population is expected to increase demand for food services from health care institutions, which account for more than half of institutional food services sales. A stronger U.S. economy and increased business activity and corporate profitability in Canada are also expected to stimulate business travel and business spending on food services. In order to capture growth opportunities resulting from the shift in consumer preferences toward healthier products, a growing number of fast food restaurants are now incorporating tasty meatless alternatives into their meal offerings. The rising popularity of these plant-based options points to an underserved market that is finally being recognized, with early adopters likely to reap the most benefits in the short-term.

On average, the industry’s real GDP is projected to increase by 1.7% annually over the period 2019-2028, about half the pace of the previous decade. Employment is also projected to grow at a slower pace, averaging 1.0% per year. Productivity will continue to account for a significant part of the increase in output. Indeed, given the weaker pace of growth anticipated in Canada’s labour supply and the gradual tightening of the labour market, fewer people will be looking for work, especially for low wage and/or part-time work. Therefore, it will be increasingly challenging for food services providers to compete with other industries to attract workers, forcing businesses to continue to improve their level of productivity. The industry will continue to explore ways to digitalize dining in order to engage customers and improve efficiency. Businesses are expected to increase the incorporation of data-gathering software and analytics programs into their operations via point-of-sale transactions, mobile applications, reservation systems, drive-thru traffic, customer rewards programs and social media. The technical feasibility of automation for various occupations within the industry given current technologies remains significant. For instance, the tasks performed by food counter attendants and kitchen helpers are at risk of being automated over the next 10 to 20 years. While the cost of technologies relative to the cost of labour (e.g. higher minimum wages making labour less attractive to capital) will ultimately influence the pace at which automation technologies are adopted within the industry, automation is nonetheless expected to maintain downward pressure on labour demand. 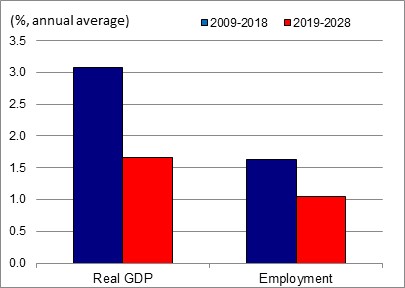