Universities comprise establishments primarily engaged in providing academic courses and granting degrees at the bachelor or graduate levels. The requirement for admission is at least a high school diploma or equivalent general academic training for baccalaureate programs, and often a baccalaureate degree for professional or graduate programs. Canadian universities employed 262,300 workers in 2018, distributed proportionately to population: 38% in Ontario, 20% in Quebec, 14% in British Columbia, 12% in Alberta, and 16% in the remaining provinces. The workforce is characterized by a slight majority of women (54%) and a relatively high share of part-time employees (25%). Key occupations (4-digit code) include:

Economic activity in universities is largely driven by demographic trends in the 18-24 age cohort (the prime age for attending universities) and particularly sensitive to government expenditures in education. Output expanded almost continuously over the past decade, even during the recession of 2008-2009, reflecting the fact that during bad economic times, youth usually stay in school longer, while displaced workers return to school to upgrade their skills in response to poorer job opportunities. From 2009 to 2013, growth in output was driven by significant gains in population aged 18 to 24. During that period, a large number of millennials graduated from high school (or from CEGEPs in Quebec) and began to attend universities. Although population in this age group stagnated between 2013 and 2018, efforts in attracting foreign students helped to increase attendance in many Canadian universities, contributing to additional, albeit slower, increases in output. The resulting pace of growth in real GDP averaged a solid 2.7% annually over the full period 2009-2018. On the employment side, growth generally tracked the rate of output, albeit at a much weaker pace of 1.1% per year. This means that productivity growth accounted for about 40% of output growth. New technologies such as online courses and e-learning applications have enabled universities to meet the growing demand for their services, without increasing employment excessively. This allowed universities to contain costs at a time when many provinces had to cope with surging fiscal deficits following the recession of 2008-2009.

Over the period 2019-2028, output and employment growth in universities is projected to weaken markedly relative to the previous ten years, largely reflecting the negative impact of demographic factors on university attendance. Population aged 18 to 24 has been stagnant since 2013 and is projected to fall significantly in 2019, before picking up gradually during the projection period. It will take, however, several years until population in this age group fully recovers, weighing on university attendance and output growth. This situation will be partly offset by the growing demand for higher educated and skilled workers, resulting from the changing nature of work and the continued shift toward a digital economy. Some jobs are being eliminated by automation, while many others require new skills and more sophisticated knowledge to better integrate and complement technology. Therefore, higher skills and educational requirements on the labour market are expected to keep pushing up enrolment rates in post-secondary education, particularly in sciences, technology, engineering and mathematics (STEM). In order to address the adverse impact of demographic factors, universities are expected to increase their efforts to attract foreign students, but this may be challenging because the demographic patterns observed in Canada are also present in many other developed countries (such as the United States, European Union and Japan), although the relatively low value of the Canadian dollar could represent a competitive advantage. Furthermore, emerging markets like China, India and Brazil are increasing their investment in universities to encourage students to attend school at home. Chinese students account for a large part of foreign students in Canadian universities, but the deteriorating relationship between Canada and China could also have negative implications, at least in the short-term. Fiscal constraints in the provinces, particularly in Ontario and Alberta, represent an additional challenge in financing universities. The resulting pace of growth in universities’ real GDP and employment is projected to average 0.6% and 0.3% per year respectively from 2019 to 2028, a notable slowdown from the previous decade, as higher enrolment rates anticipated in post-secondary education will not be sufficient to offset unfavourable demographic projections, at least not in the first half of the projection period. As it is generally the case for new technologies, the positive impact of online courses and e-learning applications on productivity are expected to fade over time, partly explaining the slower pace of growth anticipated in productivity over the projection period. 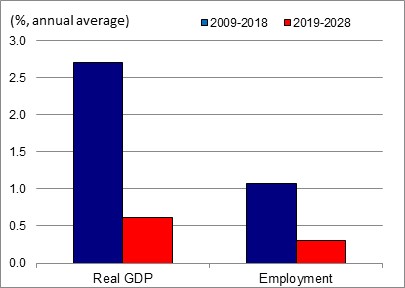