This industry comprises establishments primarily engaged in providing health care by diagnosis and treatment and providing residential care for medical and social reasons. It is composed of three segments: ambulatory health care services which include offices of physicians, dentists and health care practitioners, and medical and diagnostic laboratories (44% of real GDP and 32% of employment in 2018); hospitals which include general medical, surgical, psychiatric and substance abuse hospitals (40% and 46%); and nursing and residential care facilities which provide services to people with developmental handicaps, mental illness and substance abuse problems and services to the elderly and persons who are unable to fully care for themselves or who do not desire to live independently (16% and 22%). With a total of 1.9 million workers in 2018, health care was the second largest employer of the Canadian economy, behind retail trade. The workforce is primarily composed of women (80%) and characterized by a high level of education and a significant concentration of part-time workers (23%). The ambulatory health care services segment is also characterized by a strong concentration of self-employed (35%). Health care employment is distributed proportionately to population: 36% in Ontario, 23% in Quebec, 14% in British Columbia, 12% in Alberta, and 15% in the remaining provinces. Key occupations (4-digit NOC) include:

Health care is largely influenced by demographic trends in Canada and very sensitive to government expenditures in health and social programs. Demand for health care is essentially immune from cyclical fluctuations in domestic economic conditions as health care is a necessity. As a result, real GDP in the industry increased continuously over the period 2009-2018, even during the recession of 2008-2009, averaging 1.7% annually. Growth in output was mainly driven by the growing demand from an aging population and it would have been stronger if not for surging provincial fiscal deficits in the afterwards of the recession, which led governments to restrain public health care funding, particularly in Ontario and Quebec. Increased demand for health care, combined with expenditure constraints at the government level, resulted in long wait times for certain non-life-threatening conditions, such as knee and hip replacements, as well as lengthy delays to see specialists, although there have been some improvements in 2018. The other development that has taken place over the past decade was the requirement that patients pay a portion of the bill for services that were previously covered by the health care system. The process referred to as “delisting” varies from province-to-province but, in general, services like annual eye exams and physiotherapy are no longer covered in full by some provinces.

On the employment side, increased demand for health care led to the creation of more than 450,000 jobs in the industry over the past decade. While fiscal constraints restrained hiring following the recession of 2008-2009, employment growth accelerated markedly in 2015 and 2016, as many provinces managed to improve their fiscal positions. Employment continued to expand in 2017-2018, albeit at a slower pace, due to growing pressures on labour supply. On average, health care employment increased at an annual rate of 2.8% over the period 2009-2018, largely exceeding the 0.9% recorded for the Canadian economy. In addition to strong labour demand, limited training seats for health professionals and difficult working conditions have constrained labour supply, leading to significant labour shortages in the industry. In 2018, health care services had a ratio of 0.5 unemployed worker for every vacant position, compared to an average of 2.2 for the overall economy. While the large gap between output and employment growth resulted in negative productivity growth for the whole period 2009-2018, the concept and measurement of productivity in public health care may differ from the other sectors of the economy where goods and services are traded and more easily valued in monetary terms. Indeed, health care providers implemented several measures to improve efficiencies and lower costs over the past decade, but these changes were not reflected in the productivity numbers due to the large gains in employment. Examples of such measures include a greater focus on primary care, prevention and home care services. That said, there is still some resistance to embrace new technologies in health care services, as evidenced by the ongoing use of paper records at the offices of some family physicians and the continued use of fax machines.

Over the projection period, population aging will keep driving health care costs up, compelling provincial governments to increase health care funding. The commitment of many provinces to reduce wait times at emergency rooms as well as for surgical procedures and specialized treatments is expected to boost government spending and output growth in health care. Real GDP growth is projected to average 2.8% annually from 2019 to 2028, a notable acceleration from the previous ten years. Employment growth, however, is projected to slow, averaging 2.2% per year, but still exceeding the pace of job creation projected for the Canadian economy. Slower job growth primarily reflects labour shortages in high demand occupations (such as doctors and nurses) and fiscal challenges in provinces. Indeed, the gradual slowdown of the working-age population is expected to constrain employment and real GDP growth in Canada, which in turn will reduce growth in government revenues, thus limiting the capacity of governments to increase expenditures, including spending on health care services. In such a context, health care providers are expected to keep developing innovative approaches and implement new labour-saving ways of delivering services, leading to renewed growth in productivity.

New models of services delivery could include the expansion of the private sector involvement in the provision of health care services, the growing use of home care for terminally ill patients, and the consideration of permitting nurses and pharmacists to perform services that used to be provided by doctors. E-health and other alternative delivery models enhanced by technology are also playing an important role in almost all processes, including patient registration, data monitoring, lab tests and self-care tools. Smartphones and tablets are gradually replacing conventional monitoring and recording systems, and people are now given the option of undergoing a full consultation in the privacy of their homes. Permitting patients to access their medical files through a secure app, talking or texting with healthcare providers, and using e-consultation with some health specialists are a few of the ways to improve virtual care and potentially reduce wait times. Services are being taken out of hospital walls and integrated with user-friendly accessible devices. In addition to implementing procedures and technology to improve efficiency in the delivery of health care services, providers will continue to take steps to contain costs in the system. Such initiatives include, for example, sending patients home the same day following joint replacement surgeries. By receiving follow-up care at home, those patients are far less expensive than those staying overnight in a hospital. The increased use of midwives in some provinces and shorter hospital stays following birth are other measures that will continue to lower costs in the system. Those initiatives are crucial over the long term given the growing pressures anticipated on public health care funding brought by demographic changes. 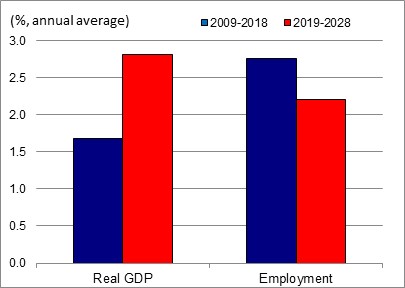