This industry comprises establishments primarily engaged in providing social assistance such as counselling, welfare, youth protection, community housing, vocational rehabilitation and child care. It is composed of four segments: individual and family services which include child and youth services and services for the elderly and persons with disabilities; community food and housing, and emergency and other relief services; vocational rehabilitation services such as providing job counselling, job training and work experience to unemployed or underemployed persons and persons with disabilities; and child day-care services, including pre-kindergarten educational programs. Individual and family services along with child day-care services are the two largest segments of the industry, accounting for 51% and 42% of employment respectively in 2018. The remaining share of employment (7%) is evenly split between the other two segments. The 4-digit NAICS breakdown for GDP is not available. Overall, the industry employed 502,900 workers in 2018, with a workforce primarily composed of women (88%) and characterized by a significant concentration of part-time workers (22%). Employment is distributed almost proportionately to population: 32% in Ontario, 30% in Quebec, 13% in British Columbia, 10% in Alberta, and 15% in the remaining provinces. Key occupations (4-digit NOC) include:

Social assistance is a central component of Canada’s welfare state. It comprises a set of need-based, last-resort income programs for Canadians who require support for a variety of reasons, including financial difficulties during bad economic times. As a result, many components of social assistance are inversely related to negative fluctuations in Canada’s economy. Demographic trends also have a significant impact on demand for social assistance, particularly for services provided to child, youth and the elderly. During and shortly after the recession of 2008-2009, output increased at an accelerating pace as the slump in the economy forced many Canadians to seek welfare in response to the quick rise in unemployment, while solid growth in the number of children aged 1 to 4 increased demand for child day care services. Output stalled from 2011 to 2014, reflecting better economic conditions and much weaker growth in early childhood population. Slower economic growth in 2015-2016 and rising unemployment in the oil-producing provinces (Alberta, Saskatchewan and Newfoundland-Labrador), following the collapse in crude oil prices, led to increased demand for welfare and job counselling services. More recently, faster growth in children and youth population (aged 5 to 17) stimulated demand for individual and family services. Greater awareness regarding mental illness, more frequent family breakups, and the gradual increase in the dependency ratio resulting from population aging also contributed to raise demand for various social assistance services over the past ten years.

The resulting pace of growth in the industry’s real GDP averaged 2.0% annually over the period 2009-2018, compared to a more moderate pace of 1.3% for employment. After peaking in 2015, employment declined significantly in the following three years, with the loss of 50,000 jobs in child day care services, mostly in Quebec and Ontario, as a result of program reforms, the stagnation of early childhood population, and the decision by the Ontario government to introduce full-time kindergarten for four- and five-years old. Solid growth in output and notable declines in employment over the past three years resulted in a surge in productivity. Fiscal constraints forced many provincial governments to restrain labour costs in social programs and implement innovative approaches to increase the efficiency of delivering services.

Over the projection period, output growth in the industry is expected to accelerate relative to the period 2009-2018, largely supported by faster growth in children and youth population and the increasing need of an aging population. More specifically, the gradual pick-up projected in early childhood population (aged 1 to 4) is expected to straighten demand for child day care services, while faster growth in population aged 5 to 17 is expected to increase demand for individual and family services. Further inreases in the dependency ratio resulting from an aging population is also expected to increase demand for social services provided to the elderly. Moreover, massive retirements of baby-boomers from the labour market are projected to restrain growth in disposable income over the longer term, and those who have not managed to save enough to fund their retirement years may require financial support (a development made even more precarious by the fact that interest rates have remained at historically low levels for most of the past decade, restraining the rate of return on financial assets).

On average, real GDP in social assistance is projected to increase at an annual rate of 2.4% over the period 2019-2028, a notable acceleration relative to the previous ten years. The pace of growth in employment is also projected to accelerate marginally, averaging 1.5% annually. Productivity is expected to account for an increasing share of output growth, given additional pressures anticipated on public finances. Indeed, the gradual slowdown of the working-age population is expected to constrain employment and real GDP growth in Canada, which in turn will reduce growth in government revenues and limit the capacity of governments to increase expenditures, including spending on social services. In such a context, social assistance providers are expected to keep developing innovative approaches and implement new labour-saving ways of delivering services, leading to a slight acceleration in productivity growth. 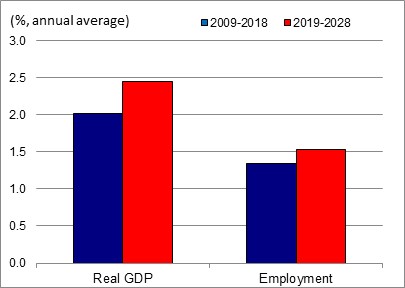